This was our first publicity, times have changed!

Formed in 1997 Clatteratti have played for hundreds of clients in a huge variety of venues all over the world, from the middle of a race track in Istanbul, to a pool side in Tenerife, from the dusty streets of Dubai to a music stage in Holland, from Jordan to Sardinia, and from Brighton to London via Cardiff, Leeds and Manchester, We’ve played the Royal Albert Hall with Disney and we’ve played outside a local Spar in Watford, no gig is too big or too small, this year we played to 5,000 walkers at the Moonwalk Charity walk London and 3,000 at the SkyShow. We’ve played at gala dinners, award ceremonies, in Harrods, Sothebys, the Science Museum and the streets of Brighton, from BBC Live Leeds to BT Sport and from Manchesters’ Skyride to the Olympic Park.

Performers past and present

Places we’ve played in the past

Clip from the past 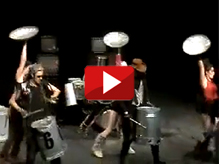